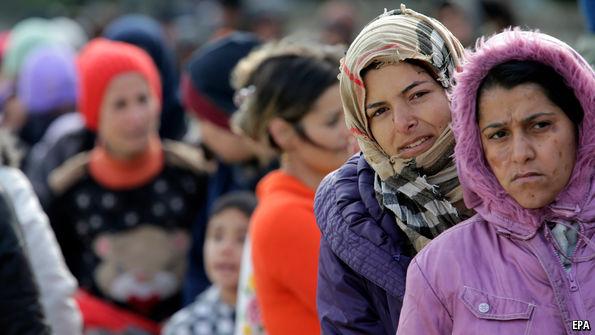 THE latest European asylum statistics seem to offer good news for refugees. They show the acceptance rate jumping by ten percentage points to 60% in the final quarter of 2015—the highest rate ever. Belgium, France, Germany and the Netherlands all granted asylum in record numbers. It would seem that Europeans are finally greeting migrants with open arms.

Yet a closer look suggests the news is promising for only a handful of nationalities. The reason acceptance rates have soared is that applications have risen from countries whose refugees are likely to be accepted. Syrians, Eritreans and Iraqis, who are let in more than 90% of the time, make up almost half of all decisions, up from about a quarter in 2014. For other countries the acceptance rate was just 28%, and there has been no jump.

By the same token, countries that seem to be migrant-friendly may simply be receiving a lot of asylum-seekers from high-priority source countries. Denmark, for instance, granted asylum to 81% of applicants in 2015, whereas Poland admitted just 18% (see chart). But in Denmark three-quarters of applications came from Syrians, Eritreans or Iraqis. Because violence and repression in their home countries is widely recognised across Europe, they have the highest acceptance rates in the rest of the continent, at 97%, 86% and 90% respectively. Conversely, more than three-quarters of asylum-seekers in Poland are Ukrainians or Russians; other European countries admit them just 36% and 27% of the time.

A fair assessment of European countries’ hospitality towards asylum-seekers would compare each receiving state’s recognition rate for migrants from each source country with the European average rate for that source country. Doing so turns up some surprises. Denmark’s adjusted acceptance rate falls just below the regional average. Bulgaria, Sweden, the Netherlands and Cyprus all post overall admission rates above 70%, but fall to within four percentage points of the European average after accounting for the composition of their asylum-seekers. Poland’s recognition rate rises from 18% to 34%.

Many countries show unusual sympathy for migrants from specific countries to which they have historic ties. Malta, which posts the highest adjusted figure at 33 percentage points above average, accepted all 770 refugees arriving from nearby Libya. Switzerland, which is home to 30,000-40,000 Tamils, was embarrassed after two Tamils whom it deported in 2013 were tortured in their home country; it now recognises Sri Lankans at three times the rate of the rest of the continent. And of the 120 Cubans who found refuge in Europe, almost half went to the Czech Republic, a legacy of communism.

What about the stingy states? Romania has the lowest adjusted recognition rate, at 15%; this may be because applicants who move on to richer neighbours and skip their assessment interviews are listed as “rejected”. In bankrupt Greece, an underfunded asylum system makes rushed decisions based on inadequate information. Perhaps the only country at this end of the table without a compelling “excuse” is Britain. Drawing on Home Office reports that downplay the threat of persecution in Eritrea, Britain accepted just 42% of the 1,645 Eritreans who applied in the last six months that data were available. The European average was 91%